Yeshua is Eternal Life.  Well respected professionals, Doctors and Scientists have testified of their Out of Body Experiences (OBE) and Near Death Experiences (NDE) of Heaven and Hell.  Their testimonies agree.  Just like the scripture has been saying for years, Yeshua is Eternity Life because He is the Giver of Life!  No one has concurred death except for Him.

“Repent, and let every one of you be baptized in the name of Jesus Christ for the remission of sins; and you shall receive the gift of the Holy Spirit” (Acts 2:38).  “For by grace you have been saved through faith, and that not of yourselves; it is the gift of God, not of works, lest anyone should boast.  For we are His workmanship, created in Christ Jesus for good works, which God prepared beforehand that we should walk in them” (Eph 2:8-10).  “If you confess with your mouth the Lord Jesus and believe in your heart that God has raised Him from the dead, you will be saved.  For with the heart one believes unto righteousness, and with the mouth confession is made unto salvation”   (Rom 10:9-10).

WHY CAN’T THERE BE ANOTHER WAY?

All have been bitten by the serpent of sin, all are unholy and sinful.  Therefore God provided His Son as the antidote to cleanse us from our sin and reconcile us to Him.  “For Christ also suffered once for sins, the just for the unjust, that He might bring us to God, being put to death in the flesh but made alive by the Spirit” (1 Pet. 3:18; Rom 3:25). “For if when we were enemies we were reconciled to God through the death of His Son, much more, having been reconciled, we shall be saved by His life” (Rom 5:10).  “He who has the Son has life; he who does not have the Son of God does not have life” (1 John 5:12).

WHO ARE HUMANS REALLY?

We are not our body but we do live in our body.  As Paul describes (2 Cor. 5:1-8), For we know that if our earthly house, this tent, is destroyed, we have a building from God. A house not made with hands, eternal in the heavens.  For in this we groan, earnestly desiring to be clothed with our habitation which is from heaven. If indeed, having been clothed, we shall not be found naked.  For we who are in this tent groan, being burdened. Not because we want to be unclothed, but further clothed, that mortality may be swallowed up by life.

Now He who has prepared us for this very thing is God, who also has given us the Spirit as a guarantee.  So we are always confident, knowing that while we are at home in the body we are absent from the Lord.  For we walk by faith, not by sight.  We are confident, yes, well pleased rather to be absent from the body and to be present with the Lord”.

Like Paul said, “For I am hard-pressed between the two, having a desire to depart and be with Christ, which is far better” (Phil. 1:23). Where is Christ (the Messiah)? Like Yeshua said, “In My Father’s house are many mansions; if it were not so, I would have told you.  I go to prepare a place for you.” (John 14:2).  “I do not pray for these alone, but also for those who will believe in Me through their word; that they all may be one, as You, Father, are in Me, and I in You; that they also may be one in Us, that the world may believe that You sent Me…

Father, I desire that they also whom You gave Me may be with Me where I am, that they may behold My glory which You have given Me; for You loved Me before the foundation of the world” (John 17:20-24).

When Stephen was stoned he looked up and said, “Look! I see the heavens opened and the Son of Man standing at the right hand of God!”… And they stoned Stephen as he was calling on God and saying, “Lord Jesus, receive my spirit” (Act 7:56, 59).  “For our citizenship is in heaven, from which we also eagerly wait for the Savior, the Lord Jesus Christ” (Phil 3:20).

“Blessed be the God and Father of our Lord Jesus Christ, who according to His abundant mercy has begotten us again to a living hope through the resurrection of Jesus Christ from the dead, to an inheritance incorruptible and undefiled and that does not fade away, reserved in heaven for you, who are kept by the power of God through faith for salvation ready to be revealed in the last time. …whom having not seen you love.  Though now you do not see Him, yet believing, you rejoice with joy inexpressible and full of glory, receiving the end of your faith—the salvation of your souls” (1 Peter 1:3-5, 8-9).

WHERE DO NON-BELIEVERS GO?

They will not be going to Heaven because their sin remains.  The place for non believers is a place called Hades and Death.  They will remain there until judgement day, where they will be judged based on their works.  It will be more tolerable for those who haven’t heard of Yeshua than those who have and rejected Him (Matt. 11:24).  In the book of Revelation, John speaks of what he sees, Then I saw a great white throne and Him who sat on it, from whose face the earth and the heaven fled away.  There was found no place for them.  I saw the dead, small and great, standing before God, and books were opened.  Now another book was opened, which is the Book of Life.  The dead were judged according to their works, by the things which were written in the books.

LOCATIONS MENTIONED IN THE BIBLE 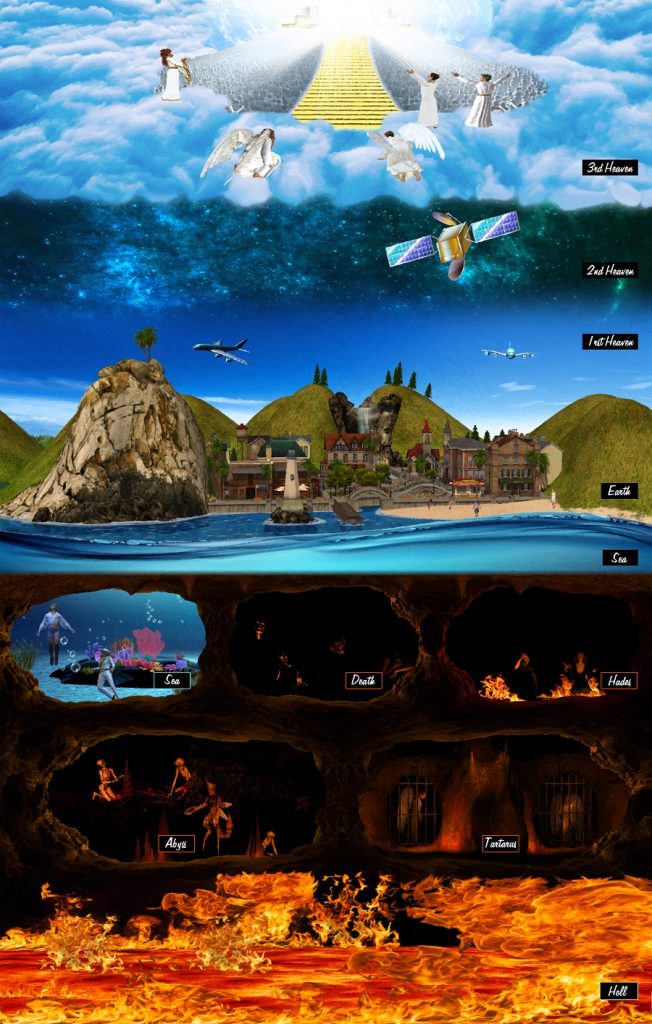